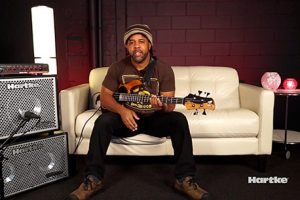 DI Music is now the proud distributor of the legendary brand Hartke Bass amps on a long term agreement. Hartke have been the innovators in bass amplification and speaker design for three decade and we are proud to represent them in Australia.

Hartke will be available in selected Specialist Music retail shops across Australia. For more information see our DEALERS.

Hartke first revolutionized the world of bass amplification in 1985 with the creation of a unique aluminum cone driver that produced a bass tone with far broader dynamics than had ever been heard before. Since then, we have introduced a complete line of bass gear, and introduced the Hartke sound to a whole new generation of bass players. Our success can be attributed to a long history of inspiring world-class musicians with our innovative bass speaker technology. In 1984, while Lorman was working as a stage manager and engineer at New York’s famous Bottom Line Club, the two crafted the first aluminum bass speaker cones into one of Jaco Pastorius’s old 810 cabinets. Only that single cabinet was made and shared by a lot of the players on the scene. When Jaco tried out the new cabinet, the solid, coherent low end and the extended frequency range of the mids and highs produced by the aluminum cones inspired him. As a result, Jaco began using the cabinet at all of his shows. By 1985, the word had spread about the new quicker, clearer bass sound of Jaco’s 810 and Hartke began mass production of its first aluminum cone bass cabinet, a 4×10″ module. By 1989, Hartke developed an entire line of XL cabinets, including the 115XL, 210XL, 410XL, 4.5XL and 810XL, which have been played on stages around the world by players like Jaco, Marcus Miller, Darryl Jones, Jack Bruce, Will Lee and Garry Tallent.

While most of these models are still in production, that first Hartke/Jaco 810 now resides at Hartke’s 34th Street Bass Lounge in New York City.

Over the years, we found that some Hartke artists liked playing our aluminum cabinets alongside a traditional paper cone cabinet. They loved the clarity of the aluminum in combination with the depth on the low end that they could only get from paper.

Fast Forward to 2005. At Madison Square Garden, Jack Bruce reunited with fellow Cream members Eric Clapton and Ginger Baker for the first time in nearly 30 years. Jack played through a pair of Hartke’s traditional paper cone cabinets, and a classic 410XL aluminum cabinet. The inspiration for the next revolution in bass speaker technology was staring us in the face from the stage of the world’s most famous arena. Hartke engineers began working on fusing the aluminum cones that had made our company famous with traditional paper cones. The goal was to create a new speaker that was unique, powerful and inspiring. The result was the HyDrive Series. Hartke’s HyDrive Bass Cabinets have become the basis for the sound that world-class musicians like Victor Wooten, Billy Sheehan, Nate Watts, David Ellefson, Frank Bello and many others rely on night after night.

Today, the XL and newly-enhanced HyDrive HD cabinets are only part of Hartke’s extensive line of bass gear, which also features the raw power of our LH, HA and TX Series Bass Amplifiers, the classic paper tone of our VX Series Bass Cabinets, countless accessories for bass and much more.